CAPS was founded in 1926 by a group of Chinese physiologists on the basis of Peking Union Medical School. The first and second president of CAPS was Robert K.S. Lim. CAPS is a nationwide academic organization under the auspices of the Chinese Association for Science and Technology. The vision of CAPS is to promote the advancement of physiological sciences in both academia and community within China. CAPS unites physiological scientists with an aim to prosper science and technology. The mission of CAPS is to enhance the growth of talents in physiology, to become internationally leading in innovative and translatable research, and to advance the boundaries of knowledge through international exchange.

Over the past 20 years there has been a phenomenal growth of Chinese economy, and the Chinese Government has been promoting a knowledge-based economy for sustainable growth. Thus, the investment to Physiological Sciences, as other basic and applied research, has been increasing significantly in recent years. This remarkable phase of development in China is associated with increases in the numbers of Chinese scientists returning to take up posts in top universities and research institutions, papers published in highly visible international journals, Chinese Physiologists participating in international conferences, and their connections and collaborations with colleagues all over the world. In addition to the rapid development of the fields of neuroscience and cardiovascular system, other disciplines such as digestive, kidney, endocrinology, respiratory, blood, reproductive systems have flourished.

Since (1) Omics and Big Data Provide an Opportunity for Physiology; (2) Integrative Biology Poses a Challenge to Physiology; (3) Translational Medicine Makes a Demand on Physiology, thus Physiology science will bring in high technologies and new thinking, play the leading role in different research areas in the world, put forward new theories and new discoveries, and high-quality research papers in physiology will be published; On the other hand, the physiology science will meet the national demands, promote the application of scientific achievements, and improve the people's livelihood, economic and national defense development and industrialization.

Up to the end of 2018, the membership of CAPS reached 3,327. CAPS members are from not only within Mainland China, but also Hong Kong, Macau, Taipei, USA, UK, Sweden, Switzerland, and Canada. Among our honorary members, there are Nobel Laureates and members of the national academy of sciences in other countries.

CAPS members attended the 37th IUPS Congress in Birmingham in 2013

CAPS members attended the 8th FAOPS Congress in Bangkok in 2015

Currently, Professor Yun Wang, the President of CAPS, is a member of the Executive Council of IUPS General Assembly, while Professor Junfa Li, is the Secretary General of CAPS

Robert J. Lefkowitz
The Nobel Prize in Chemistry 2012 for the study of GPCR 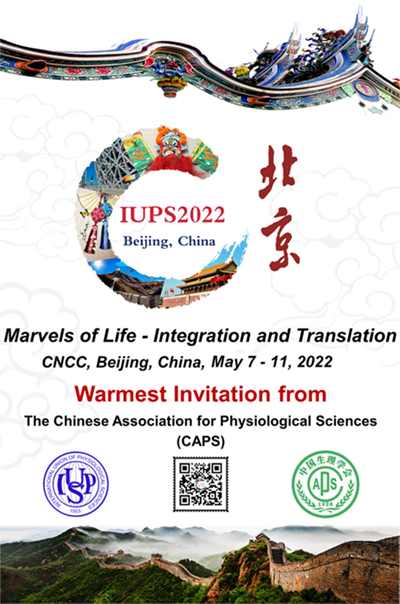